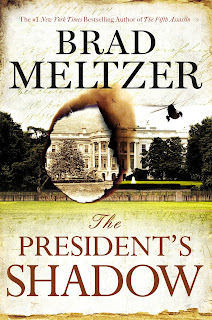 Brad Meltzer is at  it again.  With his third thriller in the Culper Ring series, readers are bound to be on the edge of their seat turning page after page after page.  The third book finds Beecher White seeking to uncover his father's past. In the process, it is revealed that there were government cover-ups, secret military locations, and of course, the key to finding out just how Beecher's father died while serving in a speciial navy unit called the Plankholders.

Meltzer is known for his fast pace, suspense-filled, and historically reseatched novels.  This book is no exception with my having finished it in the span of one day.

What kicks off this book is the discovery of a severed arm in the Rose Garden.  The arm carried a Plankholders memento, thus requiring a visit from Beecher in a secret laundry room at the White House as the White House is not sure who to trust after a security lapse.

With a would-be presidential assassin on the loose, Beecher aims to track down what happened to his dad when he was just a kid.

Meltzer's work continues to show that he belongs there with the ranks of John Grisham.  Personally, he's above Grisham at this point.

One of the most anticipated books of 2015, Meltzer doesn't disappoint and leaves you wanting more even though it feels as if Beecher's store may be coming to an end.  If it does, I'm fine with that.  I trust that Brad can come up with a new cast of characters for people to fall in love with.
Posted by Danielle Solzman at 12:32 AM No comments: