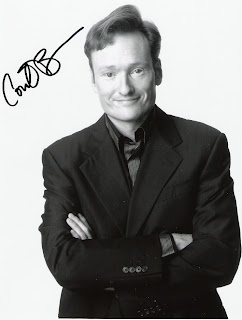 A few years ago, 2006 actually, I wrote off to Conan O'Brien shortly before the break during the Winter Olympics. A few months later, I recieved the above autographed photo in the mail.

You see, Conan O'Brien is the Johnny Carson of my generation.

I posted these some time after we lost Johnny five years ago. This is from the World Magazine:

A measure of hope on the horizon for a return to the Carson-style grounding in broader American culture might be found in Conan O'Brien, who has been announced as Mr. Leno's heir to the throne of Carson as host of "The Tonight Show." Mr. O'Brien, whose show "Late Night" comes on after "The Tonight Show" on NBC, is also liberal politically. And though he makes a point of cultivating "irreverent" and sometimes crude humor, he is a practicing Roman Catholic who sometimes serves as his church's lector, reading the Scriptures in the service. And of all the current late-night hosts, he is the least afraid of violating the tenets of political correctness—unleashing a hand-puppet named Triumph the Insult Comic Dog on French-speaking Quebec.

Some of the nicest people in the industry have written for Conan O'Brien including Brian Stack and Rob Kutner.

Brian was nice enough to arrange for me to get VIP tickets when I was scheduling my vacation to NYC to see Yankee and Shea for the first and last times. Unfortunately, my trip was cancelled due to the economy and I never got to attend the taping of Late Night with Conan O'Brien.

Rob Kutner, who came over from The Daily Show with Jon Stewart, is another one of the nicest guys I know in the industry. I got to know him during the writers' strike. He's the writer of the song about Mormons.

I first started watching Conan O'Brien in high school when encores were airing on either CNBC or Comedy Central. Once I started college and was in central time, I became a regular viewer being a late night owl when my class schedule allowed me to.

Conan and staff, I raise my cap in salute. I wish you nothing but the best in future endeavors.
Posted by Danielle S. at 4:31 PM