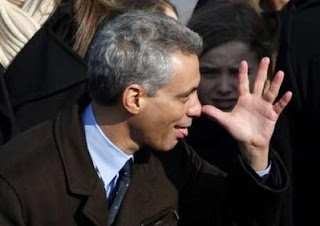 Come up with a caption for this photo.

Meanwhile, 26 candidates have chosen to run for his seat in the special election.

The Democrat who wins the primary will be heavily favored in the district, which stretches from the shores of Lake Michigan to the suburbs around O'Hare Airport. Barack Obama won nearly three in four votes in the district.

Justin Oberman, a former top official at the Transportation Security Administration and a member of Obama's advisory committee on Homeland Security, and Pete Dagher, who ran against Emanuel in 2002 and aided Obama's presidential campaign, are also in the race. So is Frank Annunzio, the namesake and distant relative of the Chicago congressman who retired in 1992.

A poll conducted for Quigley shows Quigley sporting an early lead, with 19 percent of the vote. Feigenholtz and Fritchey hovered around the double-digit mark.

The poll, conducted Jan. 8 through Jan. 13 with a margin of error of plus or minus 4.4 percent, did not include either O'Connor or Geoghegan.