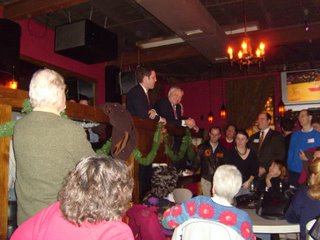 I attended the second Miller-Maze meetup which was the first to be held in Louisville since the ticket became official.

Jonathan Miller and Irv Maze gave brief speeches and continued to mingle with the crowd. By the way, I interviewed your next governor, Jonathan Miller, for a YouTube video which will be posted on The Hillbilly Report. I'll link to that when it goes online.

Tonight was not part of the announcement tour but more of a grassroots meet and greet. The official tour should be in January.

I'd estimate that there were a hundred people there, if not more. It would have been higher if it were not for a college basketball game going on but they had that on the big screen.

On my way out, I was able to arrange a blog interview with former Congresman Mike Ward.
Posted by Danielle S. at 10:29 PM