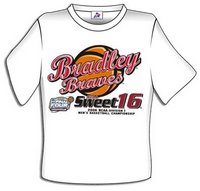 Yesterday, at halftime of the Missouri State-Louisville game, Chris Fowler, Tom Brennan and Hubert Davis were talking about the game. ESPN's keys are "points in the paint for Memphis." For Bradley, they believe that Patrick O'Bryant must dominate inside. Unfortunately, Tom Brennan and Hubert Davis were not as wise as SI and Jay Mariotti, they have picked Memphis over Bradley. How Sommerville and Carney matchup may decide the game. Patrick O'Bryant has sky-rocketed on the NBA Draft charts.

Bradley is now 12-7 all time in the NCAA Tournament. Coincidentally, Bradley beat Kansas and UCLA in the post-season to get to the 1950 NCAA Championship Game. They beat Pitt in the regular season that year. Memphis should be very afraid as this past season and in the tournament, Bradley has defeated five conference champions: Delaware State (MEAC season), Kansas, Southern Illinois (MVC Tournament), Western Kentucky (Sun Belt season) and Wichita State (MVC season). The Braves have never won three games in a row to nationally ranked opponents.

If you live in Peoria, you can watch at the Robertson Memorial Fieldhouse. Doors open at 5:30 central. Concessions will be open. For more on that, visit BUBraves.com. Also, Peoria Mayor Jim Ardis is asking everyone to wear their Bradley red to support the Bradley Braves.

I will not be liveblogging the game but will record scores at the half and the final. Go Braves!!

The Braves get the ball back at the start of the second half. Memphis is 27-0 when leading at the half. No 13 seed has advanced to the elite eight but it can happen and it will. The Braves are only down by five points. A win is possible.

The final score was Bradley 64, Memphis 80

I want to extend a thanks to Tony Bennett, Lawrence Wright, and Marcellus Sommerville for their service to the Bradley Braves. And to Jim Les for leading Bradley to the sweet 16. This was a great tourney run regardless. I'm thankful for my one year at Bradley, though I wish I could be at the Robertson Fieldhouse right now.

Marcellus had 1,495 points for Bradley in three years and he finishes his career ranked 11th all-time for the Braves.
Posted by Danielle S. at 6:06 PM